Two months, Clare. You’re a whole two months in. What have you learned?

Mere minutes before beginning this blog, I was asking myself this exact question. Things have been tough; there’s no doubt about that. My head’s been spinning off its axis. This place sure is crazy – a land of extremes. But for all the challenges, there are just as many – if not more – things to love.

I said I was looking forward to adventure, and adventure is what I got.

This post is a tribute to all the random little (mundane?) things I love most about this kooky place I now call home.

‘Clare, are you serious?’ I hear you stutter. Yep. Totally. The ovens here are HUGE. I remember very clearly when an American friend in Australia began lamenting the miniscule size of Aussie ovens. To be honest, I didn’t think much of it at the time. I suppose the presiding feeling was that my oven was perfectly practical. It was the same size as ovens in the UK. It cooked stuff.

Well, let me assure you, bigger (in this case) is most certainly better. The oven trays and roasting dishes I’d wedged into my Australian oven now fit two abreast on the same shelf. I don’t have to bake in batches. I can cook all the goodies in one go.

So fancy! So efficient!

And what of the whole Celsius/Fahrenheit conversion thing, huh? Nope. Sorry to disappoint. I’m going to need more than two months to get used to that!

Plastic bags. Not handbags. Because my post-move budget won’t allow even a thought about the latter! Did you know that they charge for plastic shopping bags here?

I’m a massive fan of this. Here’s why.

I’m pretty sure that most of the major supermarket chains in the UK charge for plastic bags. Back in Australia though, we’re not quite there yet. And you know what? I’m pretty guilty of being a lazy shopper. If I forget my reusable shopping bags and I’m halfway to the shops, I rarely turn around and go home. I keep going; I do my shopping and rack up a pile of evil, non-biodegradable plastic bags.

Maybe I’d think twice if I were getting charged for every single one. Would you?

Anyway, it’s not just the supermarkets. Californian businesses charge you for every bag, no matter what the material. Say you go to a lovely boutique and find the perfect dress for an upcoming party. The shop assistants will simply fold up your dress and hand it to you. I must say, it’s a shock at first but then you realise your options are quite simple, really: you either 1) pay for a bag, or 2) carry the dress in your arms.

Nobody dies, and you just get on with it.

The biggest win, though? Go on a big ol’ shopping excursion and you’ll come home with a lot less stuff. Good for your arms and good for the environment. Everybody wins!

So come on, Australia: come to the party!

It’s the dead of winter right now. It should be freezing. I should be wearing a coat, huge scarf, and furry hat. But I’m not. My ankles are out, I’m wearing a t-shirt, and it’s a whole 26 degrees Celsius (about 80 degrees for you Fahrenheit people).

Palo Alto is essentially its own microclimate. It’s the same kind of weather every day I wake up: a cool start to the morning, warming up to a bright, sunny day in the afternoon. There’s rarely rain, and I seldom check the forecast. The weather is consistent! It’s comfortable, and easy to plan for. Palo Alto enjoys low rainfall, zero snowfall, and a large number of sunny days per year. It’s a delightful place to be!

What do you think, Melbourne? Predictable weather sounds likeable, doesn’t it? 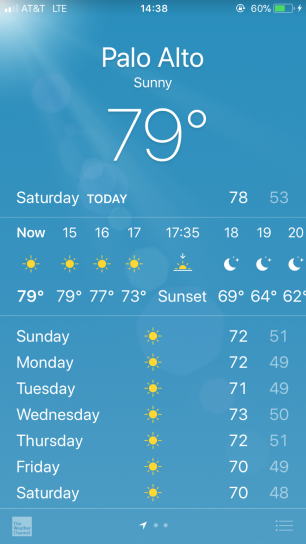 Maybe it’s just the tourist in me, but palm trees are exactly what I envisaged back when I was California Dreamin’. They feel so quintessentially Californian. And I love them! They’re everywhere. Along the sides of highways, adorning the beaches, lining the streets. They’re in petrol stations and parking lots, and they dress the skyline in every direction you look.

Most of all, palm trees make me feel happy… and like I’m on a permanent holiday!

I know what you’re thinking. Well, it could be one of two things. Either a) YUCK, or b) ‘Clare, you made a typo’. Look closely at the title of this section: there’s an ‘s’ on the end of ‘Brussels’. But no, that isn’t a typo. I know that people from other places – like Australians – tend to say ‘Brussel sprouts’ (without the ‘s’). And, yes, when I was first corrected here I was ready to get all indignant and proclaim another American spelling ‘mistake’. But instead, I decided to research it first.

It turns out that ‘Brussels sprouts’ is the correct term. It’s harder to say, for sure, but it’s correct. According to Wikipedia, they’re popular in Brussels and that’s probably where they got their name. And goodness me, don’t I love a good, ‘evidence’-based answer to a conundrum!

Now, if Australian folklore has normalised for you a rigid hatred of these gorgeous little sprouty treats, you’re about to be disgusted. They’re on the menu everywhere here. Let me tell you now: no matter what the cuisine (see: my local Japanese restaurant), Americans are committed to their sprouts. They’re crispy, sweet, and golden brown.

Americans’ ability to question themselves

Getting a little more serious now, this is something I feel quite strongly about. It’s easy to pick on citizens of the States, and especially given the current political climate. I’m sure Americans who live and travel around the world face the vitriol every single day. I mean, this is the country whose government was recently shut down, and that last week sent an ill-informed broadcast to its Hawaiian citizens that a massive missile was heading their way. Don’t even mention guns, the death penalty, or the country’s very conservative attitude towards women. There’s a lot that concerns me.

But you know what I love about most Americans, and especially those in the very liberal state of Cali? They openly poke fun at their President. They protest. They rally together and demand change. They don’t hesitate to speak out, and they do it frequently and passionately. As many are all too aware, there exist countries in the world in which that sort of speech is banned, or at the very least, actively discouraged. What’s worse, there exist countries in which citizens die for speaking out against their government, or for demanding better laws and standards for their fellow people.

I consider Americans lucky, in this instance. Rebellion is, to an extent, a valid instrument of change. I’m in awe of those working to make this country a better place. While I’m in awe of those Americans making daily, grassroots efforts in affecting that kind of change, I also can’t go past this point without mentioning Oprah’s speech amongst the black garb-clad stars at the recent Golden Globes.

Bold actions by those we admire can change the course of history. And America does this oh-so-well.

As for me though, I know that once I’ve become accustomed to the good, the bad, and the ugly of all this crazy country has to offer, I’ll be joining in too.