It’s been a while, right? I know. I really am sorry. But you’ll be glad to know it’s been one hell of a time: friends visiting from abroad, one successful albeit fear-inducing interview (more in the next post!) plus a scrumptious little mini-break!

So much has happened over the last six months, let alone the last two weeks. And if there’s one thing I’ve learned during my time in America, it’s that change takes guts. I recognise that. You probably do too. But how about American lawmakers?

The issue of gun control is… well, far from under control.

This is how it’s gone so far. I’ve been in America, living here with my young family, for nearly six months. I’d arrived already worried about gun-related violence, and my anxiety didn’t get any better. In 2018 to date, the country in which we’ve made our home has already seen a grand total of 69 mass shootings (as at 22 April 2018). Mass shootings, in this instance, defined as 4 or more people shot (killed or injured) in a single event, excluding the perpetrator.

If you haven’t done so already, please take a moment to really let that sink in.

Mass shootings have happened 69 times over, in only the first third of the year. Including two, today, as I type this. One in Antioch, Tennessee. And another in Louisiana, New Orleans.

I have a stake in this now. We all do. But my children, my husband, even me… our lives are all at stake. We live here. We pay taxes here. We contribute to the economy here. Our kids go to school here. But with the NRA spending millions of dollars every year on influencing gun-related policy, and with US government decision makers still receiving myriad donations from said association (including $31M contributed to the 2016 campaign, supporting Trump and opposing Clinton), can we really expect guns to be banned any time soon?

We ought to, yes. But despite the stats, deaths, and the most gruesome of traumas already suffered by families all over America, I’m still not sure whether or not that’s realistic. 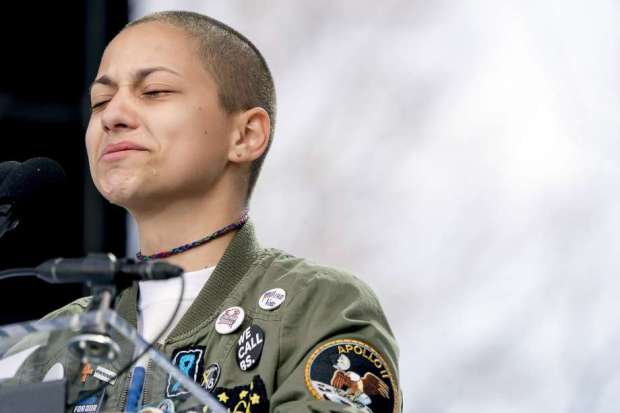 “At the end of the day, we don’t want people to have their guns taken away. We just want the people to be more responsible. We want civilians to have to go through more rolls of red tape to get what they want, because if any of that tape can stop those who shouldn’t own a gun from owning a gun, then our government will have done something right”.

It was only very recently that I decided to actively take a stand and demand reform. Why? Because so many before us have had their government fail them. Because I’m determined to make sure their lives weren’t lost in vain.

Because my life – and the lives of my family members   – quite literally depends on it.

March for our Lives

Admittedly, since having kids, it takes a lot to move me to rally in the streets . This is, no doubt, a situation brought about by my relatively comfortable life in quiet, suburban Melbourne. Out of sight, out of mind, right? But when something becomes so real, so connected, and so close to home, the anger and pain begins to build. Slowly but surely, since living in America, I’ve begun to experience more anxiety in open spaces. At Clara’s pre-school. At any public gathering. I almost feel guilty for taking this long to realise I need to stand up.

So, with so much at stake and with such a huge volume of life already lost, there was absolutely no doubt in our minds about joining March for our Lives back on March 24. It was a beautiful moment to be part of and it brought tears to my eyes on a million occasions (thank you, sunglasses). There was a strong sense of community and camaraderie. People of all ages were marching. Kids had made their own placards. Teenagers were out in huge numbers. Elderly people were there with grandkids, linking arms and shouting their lungs out in unison. We marched peacefully through Burlingame, chanting messages of pain and hope and burning, visceral energy. Some people made noises so desperate that I wasn’t at first sure that they came from a human.

Finally, it felt like we were part of a movement; one that was slowly – but very surely – gaining traction.

And even then, the strange and horrible truth was that someone could be hidden in an apartment above, perfectly positioned to open fire on the crowd.

But why would they do it?

A majority of active shooters are male, and act alone. The trends are absolutely frightening. But why the hell do American decision-makers continue to ignore them?

Here are three of the main pro-gun arguments I’m managed to distill alongside three of the very best quotes I think cut right to the core of why these arguments are – to put it simply – a pile of crap:

I need guns to feel safe and protect myself and my family.

“I had a break-in in Manchester, England, where I was tied up. I had my head cut… They came through the window with a machete…and Americans always go, [In American accent] “Well, imagine if you had a gun”. And I’m like, “All right. I was naked at the time. I wasn’t wearing my holster. I wasn’t staring at the window waiting for c***s with machetes to come through”. What world do you live in where you’re constantly fucking ready? You have guns ’cause you like guns!”.

It’s the mental illness – and not the guns – that’s the issue.

“We want increased mental health care for all those who need it—including the angry, frustrated men who almost always commit these crimes. Mental illness and gun violence are not directly correlated, but when the two go hand in hand, Americans – often children – lose their lives”.

It’s called the Second Amendment, b*tches, and we’ve got a right to it.

[I hear people say things like] “You cannot change the Second Amendment!”. And I’m like, “Yes, you can. It’s called an ‘amendment’”. If you can’t change something that’s called an ‘amendment’, see…you need a thesaurus more than you need a constitution… Don’t think your constitution is set in stone. You’ve changed things before. You used to have prohibition in there, right?”.

And as if you needed convincing, you can check out ProCon.org’s list of top pro-gun arguments and damn good comebacks here.

I know not everyone thinks like me. Not everyone’s as liberal or as progressive. But regardless of one’s political persuasions, surely we can all agree that people dying, en masse, at the hands of a gunman, is not something that’s desirable.

Although it feels like banging our collective heads up against brick walls, there’s gotta be hope.

There is, at least, a stack of evidence that gun control works. Take Australia, for example. In 1996, 28-year-old Martin Bryant walked into a café in Port Arthur, ate lunch, then pulled a semi-automatic rifle out of his bag and shot dead 35 people. In the years that followed the government’s gun buy-back program, Australia’s firearm homicide rate dropped by 47%, and its firearm suicide rate by a staggering 57%.

So, yes. I deserve a say in this. We live in America. We pay taxes in America. We contribute to the economy in America. For f***’s sake: we come from a country that’s dealt with this before, and been damn successful at it too.

My intuition says that grassroots action will be key to encouraging decision makers to focus on solutions that may seem small at first, but that will eventually add up to acts of reform much greater than the sum of their parts. March for our Lives, for example, is currently running a campaign to sign up young voters. Why not share it with your networks now?

Further, I feel like there are so many solutions that could begin what’s likely to be an incredibly slow but important process of change: greater taxes on alcohol (to curb alcohol-related gun violence),  and national (rather than local or state-based) laws for gun use are just two examples.

But the troubling thing is that not even reform will stop the next mass shooting. How can it, with the rate at which it’s increased over the last few years?

No, it’s going to happen again. There will be another, and perhaps many more.

That is, unless, this damned determined mother-of-three has anything to do with it.